LINCOLN PARK — For more than 10 years, Mike Fraser made a living by running competitive Skee-Ball leagues at bars across Chicago.

“Skee-Ball is my livelihood and my passion,” Fraser said. “There’s dozens of us.”

This year’s inaugural “Skee-son” is halfway through, with 18 teams, each made of three “Skee-mates,” competing for the “Stan-skee Cup.” Teams include, “Thank You For Skeeing A Friend,” “All Eyez On Skee,” and “The Skee-D-Skee Now Recommends.”

“We love the puns around here,” Fraser said.

On Monday morning, Fraser sent an email to his fellow skee-ballers to inform them of an “emergenskee:” A fire raged in the gangway between Twisted Hippo and a neighboring apartment building. Explosions of alcohol tins rocked the buildings, flames made walls collapse and bricks spilled onto a row of parked cars.

Fraser’s vintage skee-ball machines, known as “Beer Ball,” were trapped inside. He had bought the last two ever manufactured.

By daylight, the extra-alarm fire had finally flamed out. He rushed to the scene with his 35-week pregnant wife and made a beeline past caution tape, firefighters and news reporters to the site of his beloved Skee-Ball machines.

They were nothing but rumble and ash.

“I was in a trance,” Fraser said. “There were no machines. There was no building. It was hard to breathe. And at that moment I realized I probably shouldn’t have been standing there.” 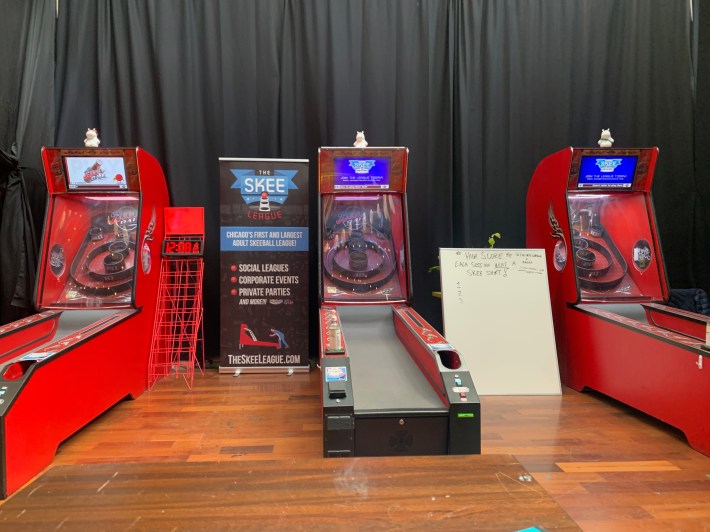 Credit: Courtesy of Mike FraserA “before” picture of Mike Fraser’s beloved Beer Ball machines, including the last two ever manufatured. 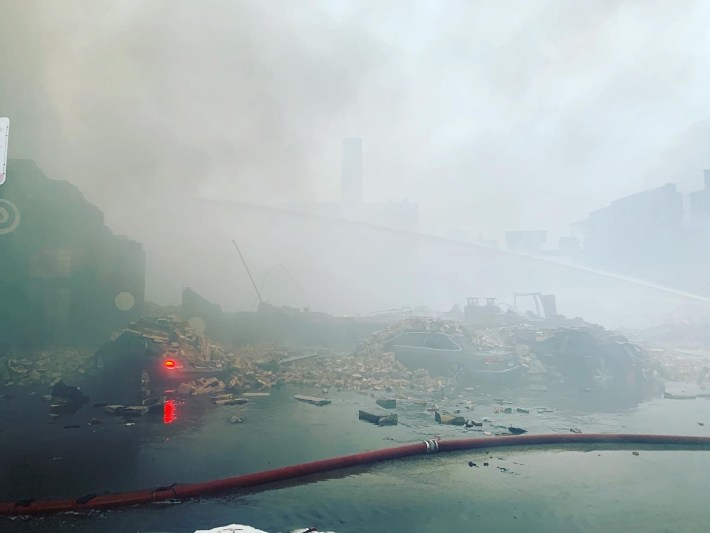 Credit: Courtesy of Mike FraserMike Fraser’s “after” picture of his beloved Beer Machines following Monday’s fire at Twisted HippoFraser said Beer Ball machines, if he can track down others, cost about $6,900 each. The Hippo Ball’s top-scorer, James “The Shark” Schwark, set up a GoFundMe to help Fraser replace them. Donations quickly rolled in from Skee-Ballers and Skee-Leagues across the country. The GoFundMe has raised almost $20,000 in three days.

“It’s bananas,” Fraser said. “The love is unprecedented. All the attention is a little uncomfortable and vulnerable. It’s overwhelming how much support there’s been. You just feel so grateful that people care enough to support your dream.”

On Thursday, Fraser, who calls himself the “Skee-E-O,” found a way to keep the good times rolling. He arranged for The Hippo Ball to bounce back and resume play at Glascott’s Saloon, 2158 N. Halsted St, the original location of the “The Skee League” where there are two remaining “Beer Ball” machines.

Fraser said the league had “not lost a single roller.” He dedicated the night to Twisted Hippo. “Since You’ve Been Gone” by Kelly Clarkson, “Total Eclipse of the Heart” by Bonnie Tyler and “I’ll  Be Missing You” by P. Diddy played in the background.

“We pay homage to Twisted Hippo, we mourn and we celebrate the times we had there,” Fraser said. “Everybody is sad and wants a hug. It’s sad. But we’re also celebrating that we’re still here”

Credit: Mack Liederman/Block Club ChicagoThe Hippo Ball had its bounce back event on Thursday night at Glasscot’s Saloon in Lincoln Park. Fraser said the league, “didn’t lose a single roller.”Fraser made his rounds in the packed backroom at Glascott’s and told everyone, “I’m so happy you came.” A gathering of euchre players, who had previously booked the space, moved to the bar upfront.

Glascott’s general manager JR Leyva has worked with Fraser for 11 years to stage Skee-Ball leagues on Tuesdays and Wednesdays, drawing up to 180 people each week. After hearing about the fire at Twisted Hippo, Leyva told Fraser that The Hippo Ball could finish its season with away games at Glascott’s.

“We support Mike 100 percent, so I said, ‘anything we can do for you, let us know.’ And he goes, ‘There is this one thing,’” Leyva said. “His passion translates to everyone. They can see it. And they feel it too.”

Fraser said he learned about competitive Skee-Ball from high school friends, got good enough to play in New York City tournaments and started a league in Chicago because he “needed to make some side money” while “working for Yellow Pages, when the Yellow Pages started to not be a thing.” 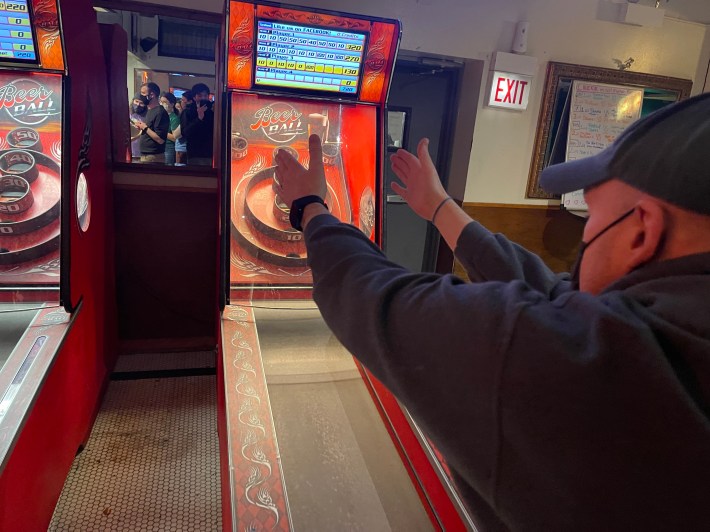 Credit: Mack Liederman/Block Club ChicagoFraser demonstrates how to keep square towards the target and establish the firm base neccessary to toss a “hundo.”The Skee League always sells-out, Fraser said. His goal is to, “bring people together to share in the love of Skee-Ball.”

Anyone can be good at it, Fraser said. Beer Ball machines have unique wooden finishes that are softer off the bounce and bowling-style scoreboards. The first two rounds are played “down the middle,” where players must shoot for the 50s and 40s. The final “Hundo Round” requires hitting 100-point scores in the corner.

Kevin McGhee, known as “The MJ of Skee-Ball,” grabbed the red balls and rolled 8 out of 9 “hundos” in his final turn. The score was high enough to momentarily break the machine.

“We’re glad to still be playing,” McGhee said. “I used to play Skee-Ball when I was little, and then it just stuck with me as I grew up, from Chuck E Cheese’s to Six Flags to Dave and Buster’s, and now I get to play in Mike’s league.” 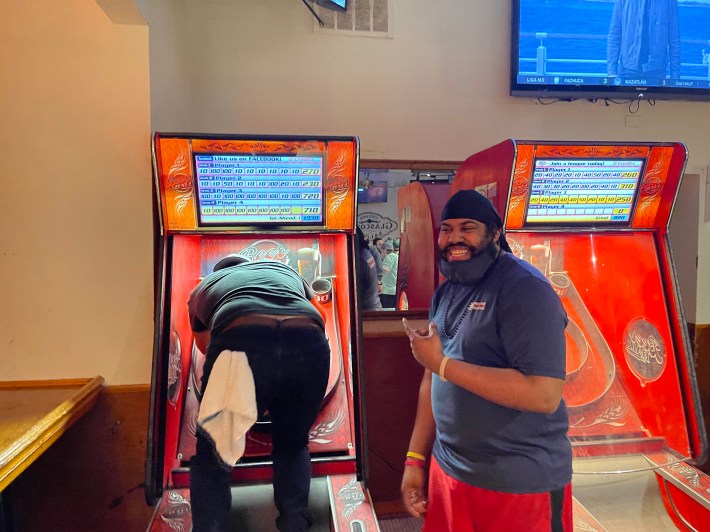 Credit: Mack Liederman/Block Club ChicagoKevin McGhee, the “MJ of Skee-Ball,” stands next to his game-breaking score — 8 “hundos” in a 9 roll turn— as Glascott’s owner JR Leyva has no choice but to fix the machine. Skee-Baller Jared Banaszak moved to Chicago in September and said the league has helped him “meet tons of people.” Fraser gave Banaszak one of his many skee-named prizes: “The Skee-Spirit Award.”

“It goes to the person that brings the most energy to the skee-ball league, and I had to give a speech,” Banaszak said. “I have the trophy on my bookshelf now, Mike put my name on it and everything.”

Sarah Schwark, wife of “The Shark,” brought homemade baked goods like “Rice Krisp-Skees” to Thursday’s comeback to raise funds for the “GoFundSkee.”

“Any word you can add a Skee to, you do it,” Sarah Schwark said. “When you’re at skee-ball, you’re just in skee-ball mode. We’re here for each other.” 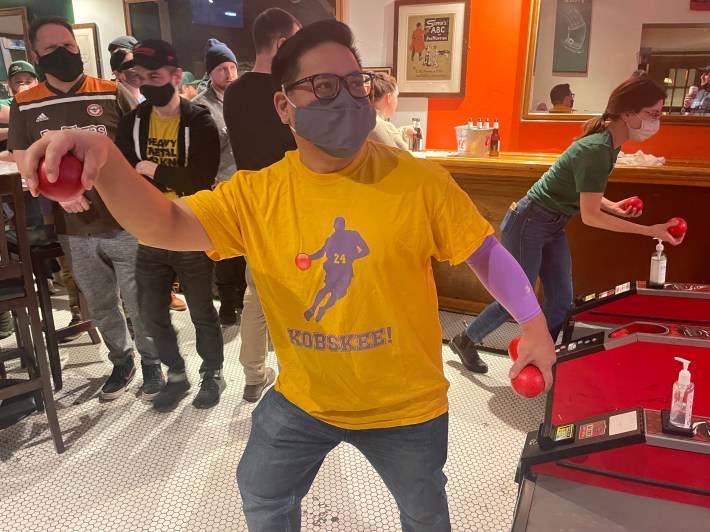 Credit: Mack Liederman/Block Club ChicagoSkee-baller Jason Magalin was given a nickname by Fraser, “Kobskee,” and wears a purple arm sleeve to compete. Fraser insists James “The Shark” Schwark started the fundraiser because “he just really wants to win the league.” But Schwark said this is bigger than Skee-Ball.

“Mike has worked forever building this, so it’s more than just replacing three boards — it’s about building the community back,” Schwark said. “And now he’s got a kid on the way.”

It was just last season that Fraser stood on the bar at Glascott’s and addressed his loyal Skee-Ballers: This might be his last year as their Skee-E-O. The Skee-Ballers had a gift ready for Fraser: A onesie for his expected newborn, reading in front, “Future Skee-E-O.”

“They say I brought all these people together, but these people are the glue that’s holding it together,” Fraser said. “You add the bar, the atmosphere, the competitiveness, and it’s magical.”

Fraser has earmarked the donations for new machines, and said he’s planning on reaching out to the company that used to make Beer Ball. He’ll plead for them to make just a couple more. 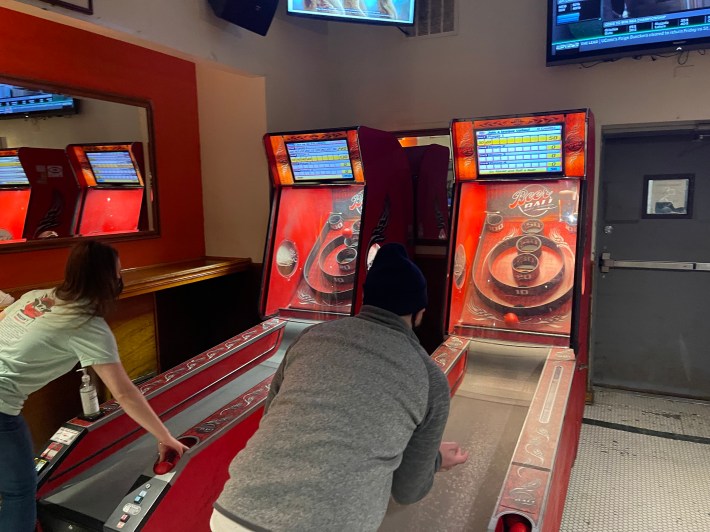 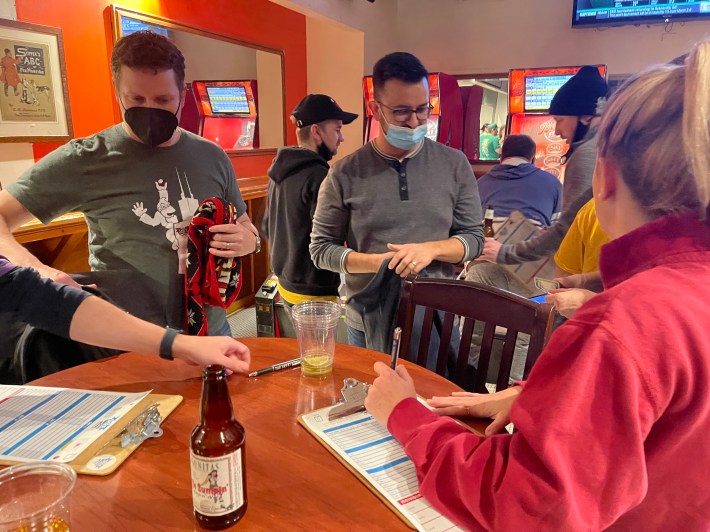